A flight at 6 in the morning is not normally an easy endeavour but enduring it with the promise of a stay at Emidio Pepe in Abruzzo, helps to curb the tiredness. The view alone from this rolling hilltop jewel was all the tonic needed. Nestled under the watchful eyes of Gran Sasso – the largest mount of the range and surrounded by their vineyards, it’s no surprise that they’ve been going for over 50 years. I would happily luxuriate here for longer, a decision which came to me before even trying their wine.

Warmly greeted by the whole family it didn’t take long. In true Italian style, we sat down to multiple courses on the veranda to get to know our hosts. Under the watchful gaze of Emidio, the women of the vineyard have taken charge in different areas, and we were lucky to have Chiara, his granddaughter host us at the Agriturismo. Her ability to imbue in us in a short amount of time the passion and loyalty their family has to showcasing montepulciano, pecorino and trebbiano (one of the oldest but sometimes most indistinguishable grape varieties, which here stole the limelight) was nothing short of miraculous. And what wine. To match, her partner Charlie treated each of us with mouth-wateringly fresh tomato and guianciale pasta followed by a steamed-to-perfection whole bream and clams. Not a bad first night. 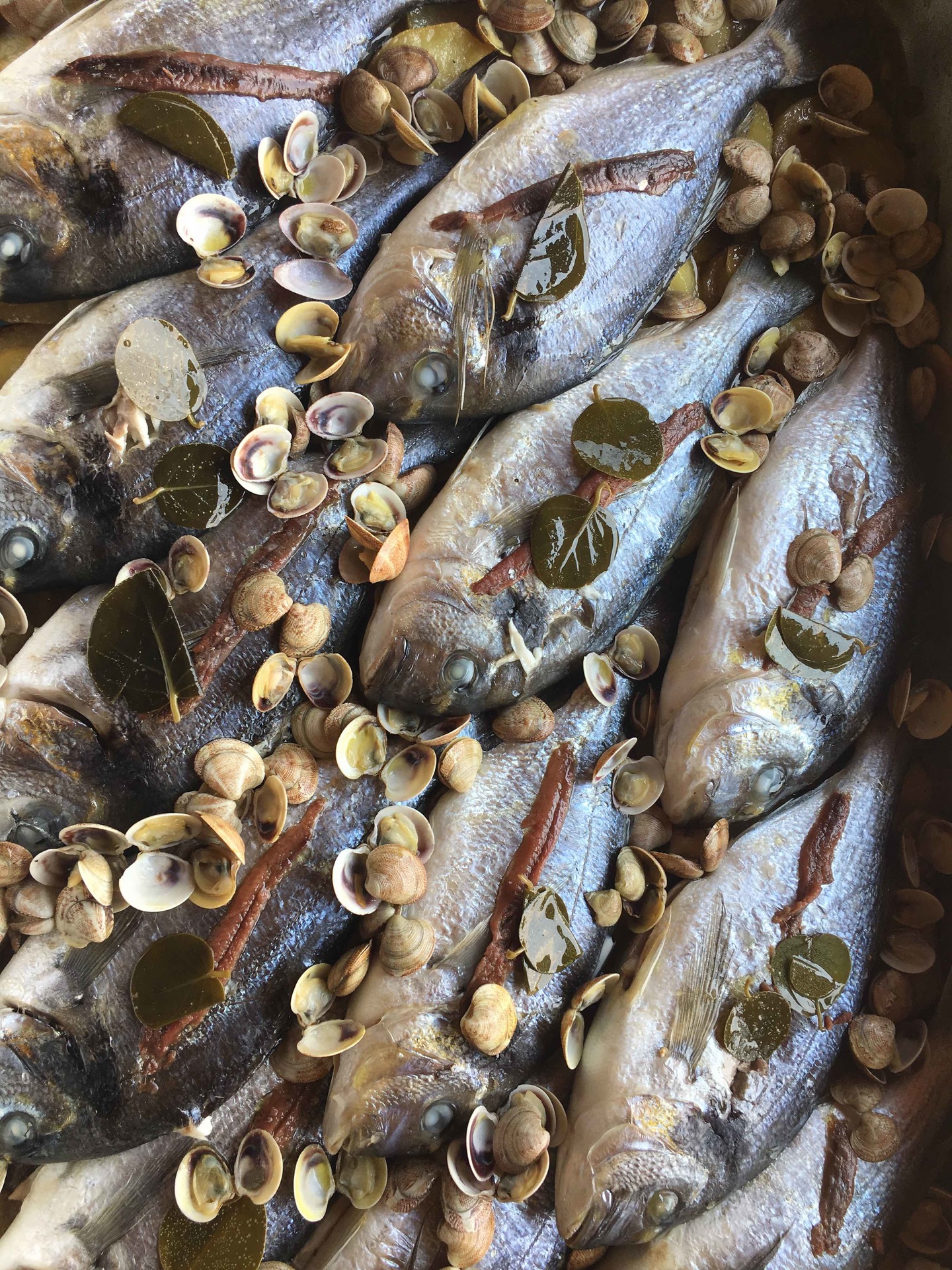 It was off to bed with happy warm bellies and hearts to have a fresh start for our morning of prepping. Flying over to visit wasn’t just a friendly trip to delve into our wine list (although that too) we were there to work! Conceived of the previous year, Trullo was doing a takeover for Emidio Pepe’s cellar opening 2018 - a day where the vineyard opens their doors to all for tastings, food and festivities. Trullo would be providing a four course meal to match their wines so there was a lot to do.

Up and early the next morning after a delicious spread of breakfast cakes (my favourite sort of breakfast) we donned our aprons and set to work to prep as much as possible. The kitchen activity gravitated around the female head of the Pepe clan, Nonna. Under her watchful eye the entire team were taught how to make a variety of local dishes, and slackers were not welcome! Despite not speaking the same language she masterfully instructed us and before long we were wrapping lamb offal in leaves bound with intestines like the seamstresses we were born to be. With the occasional nod and laugh from her the ‘approved’ packages were set to stew as we took ourselves off to meet our next appointment – at a pig farm nearby.

The kitchen activity gravitated around the female head of the Pepe clan, Nonna.

To describe the work of the Fracassa brothers as traditional would be misleading despite creating products famous in the area. Italian meat production isn’t known for its high welfare standards but winding our way down from the back door of the brother’s house to a secluded sunny valley complete with grassy pig field and pond for all their wallowing delights, this was far from traditional. Their team of pigs galloped over, grunting galore to meet us, clearly healthy, happy and endlessly curious. The space they were free to roam in made me reconsider my Islington abode, complete with self-producing water and food troughs.

Evident in the produce, a happy pig creates a happy meal and we were taken back to the house to learn how they make ventricina - a product we commonly use from them at Padella. This spread of pork infused with red peppers, orange peel, rosemary and spices is piped into a pig’s bladder before being hung to cure. A lavish meal followed our demo, accompanied of course by our staple of Emidio’s wines and some bitter but stomach soothing home-made fernet. Saluti! 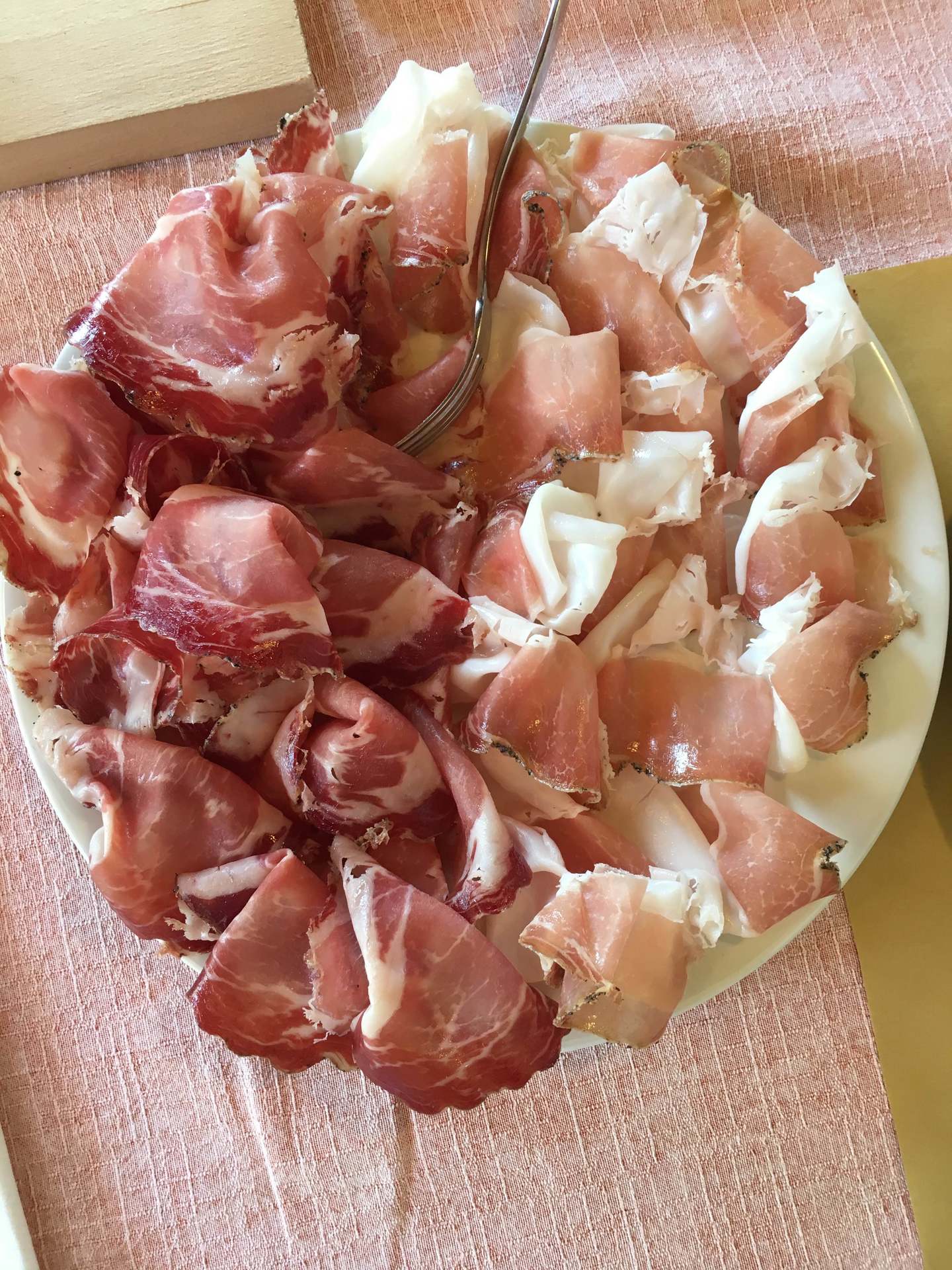 With full stomachs, and more than aware we would be eating again before long, we settled ourselves into a tour of the estate with Chiara. Their impressive cellars with terrifyingly precarious pyramids of vintages was a cooling site to behold. The real passion was found standing in Emidio’s first tiny plot which he planted by hand in 1964. Their respect for biodynamic farming, and trusting the old vines to produce something unchallenged, shines through every contact they have with the product. Fermented in cement or stainless steel and then bottle-aged with no oak contact or blending with other varietals really let’s these grapes stand out and is a wonderful testament to knowing exactly what they can do. With over 50 years of production and our satiated taste buds as witness it is easy to see they have succeeded in their passion.

To work up more appetite we took a walk to our closest village Torano Nuovo with some of the Pepe clan and their Alsation-cum-wolf, 'Black'. Greeted throughout the town like royalty, Chiara led us to the Mayor's 'Osteria dei Maltagliati' - a beautifully old but lovingly restored restaurant complete with historic war tunnel that could lead you out of the village in secret. We were pretty happy to stay sipping rose spritz in the sun watching Black launch himself at any white car that should dare cross his path.

Before long it was back to the estate to finish our culinary day feasting on our earlier prepped dishes.

Nona in true Italian form kept them coming and wouldn't take no for an answer.

On the day of the party our abode transformed into a hive of activity. We were up early to prep the four courses. Some were even up through the night to turn the slow cooked lamb. The whole family took a role, with Emidio watching on in a suit and flat cap, only breaking to turn his attention to an unruly vine on the garden border. As the diners started arriving we hit full swing. They were treated to a range of antipasti – seabass carpaccio with fennel tops, asparagus with a hazelnut salsa, and crostini with both Marsala glazed chicken liver and an anchovy emulsion topped with fresh cherry tomatoes. The starters were paired with Emidio’s 2014 pecorino and cerasuolo 2017, the latter being a wine sadly kept for Italy’s taste buds only.

Watching people devour and ask for more didn’t put our timings out too much, we brought together a primi of zucchini flower and mint risotto, which went well with their loved Trebbiano 2015. For main: our sharing showstopper of 'slow cooked' lamb with borlotti beans and salsa rossa paired with their 2010 montepulciano. From the way people ate the platters and kept coming back for more, I think we succeeded. With a quick dessert of Eton mess, folded with cherries from the estate (we had to bring something British to the table afterall!) we, with calmed nerves and tired bodies, took to the party. 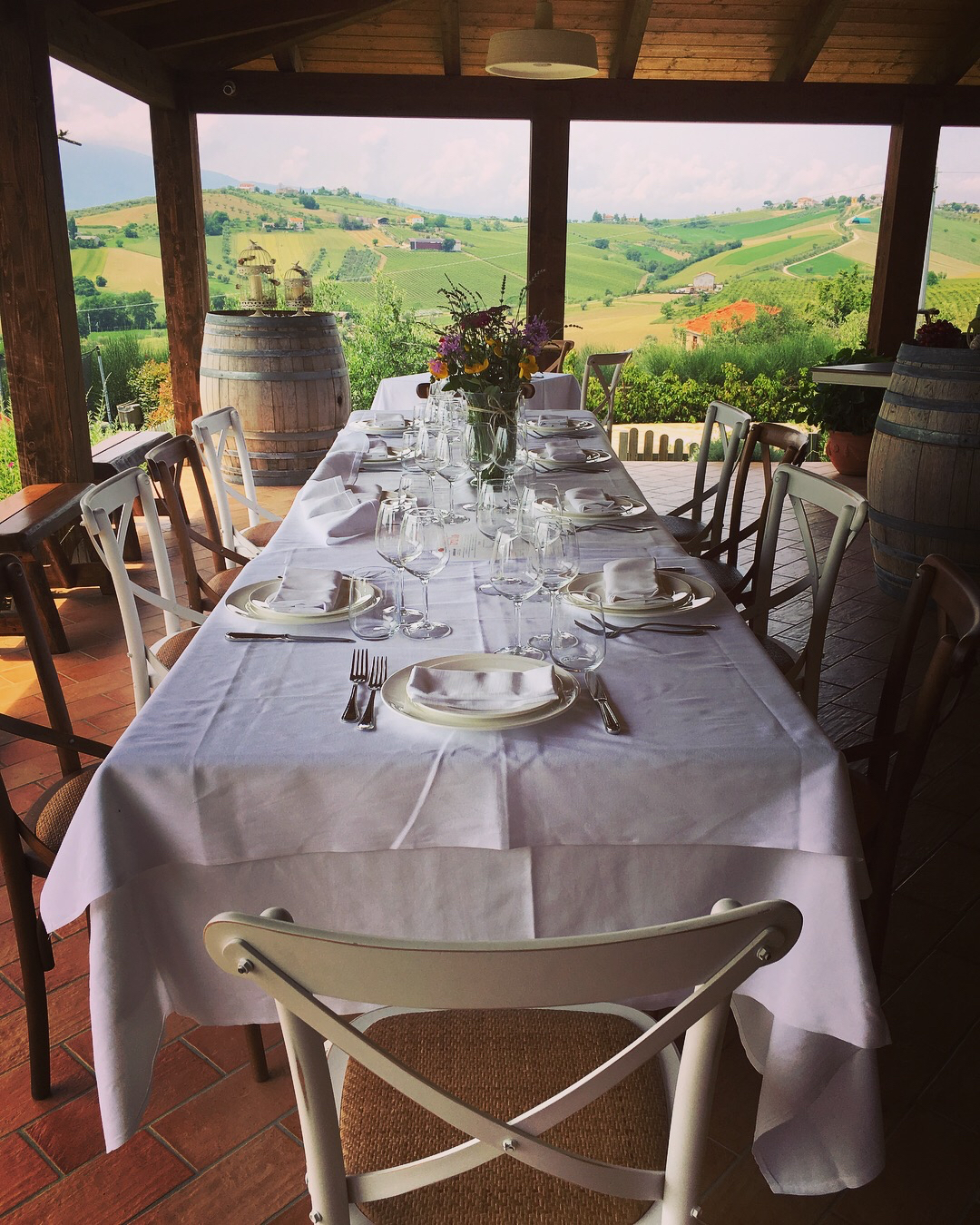 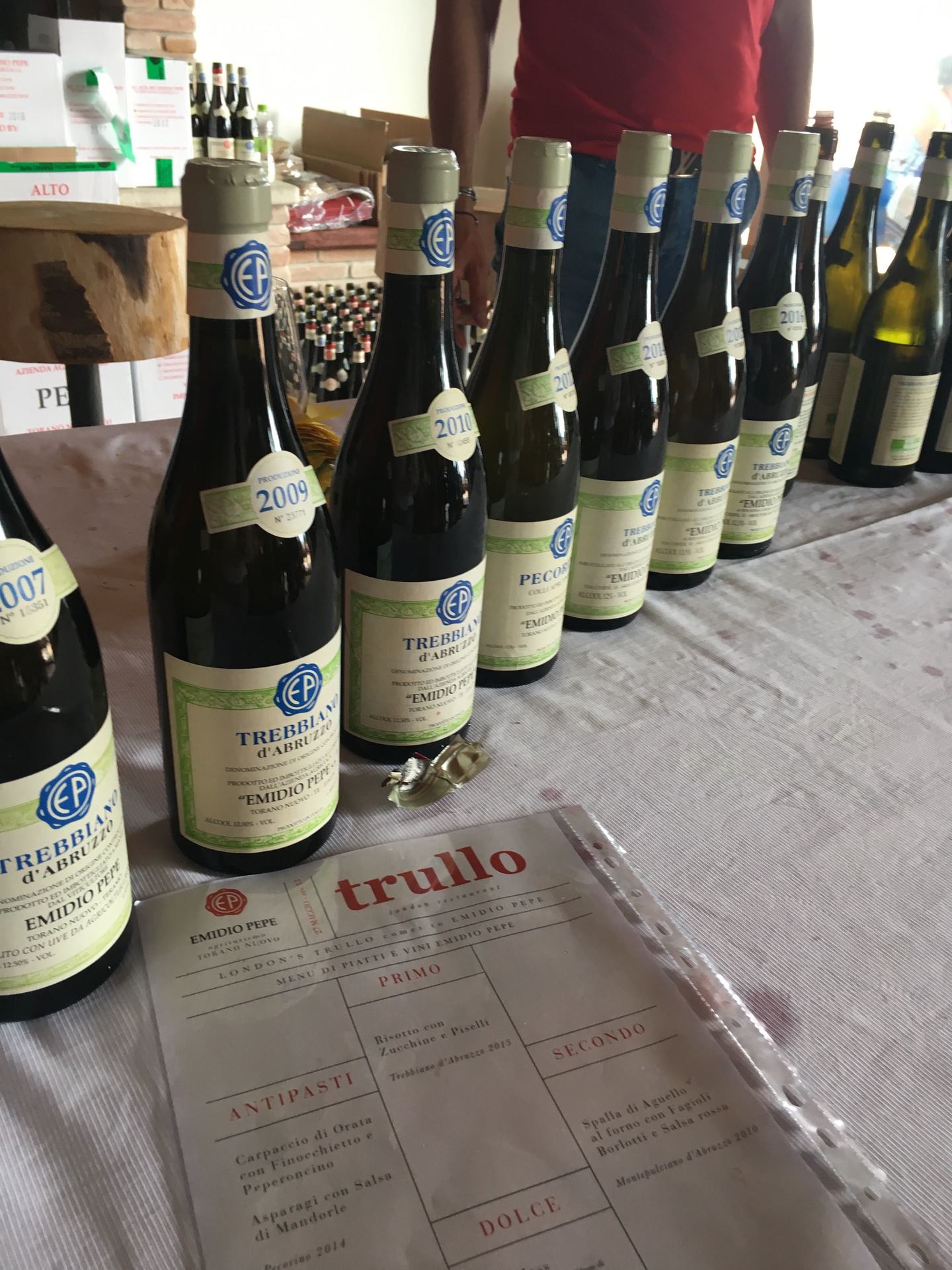 With a thousand people expected that day it didn’t disappoint. The weary Trullo team took to the dance floor with gusto, but in true Italian style where outshone by Nonna and Emidio’s waltzing.

With full glasses of wine in hand, it felt like we were truly one of the family. 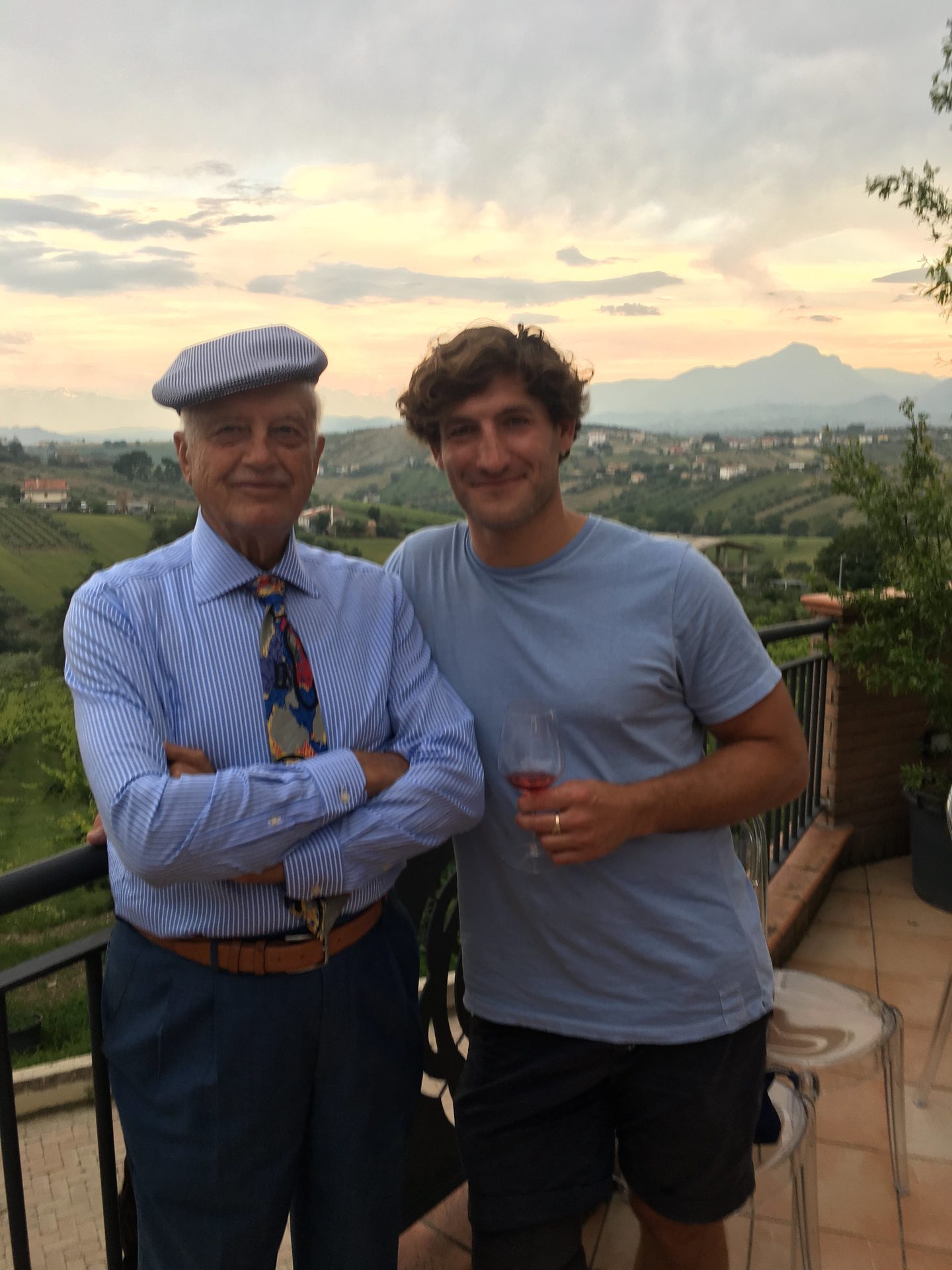